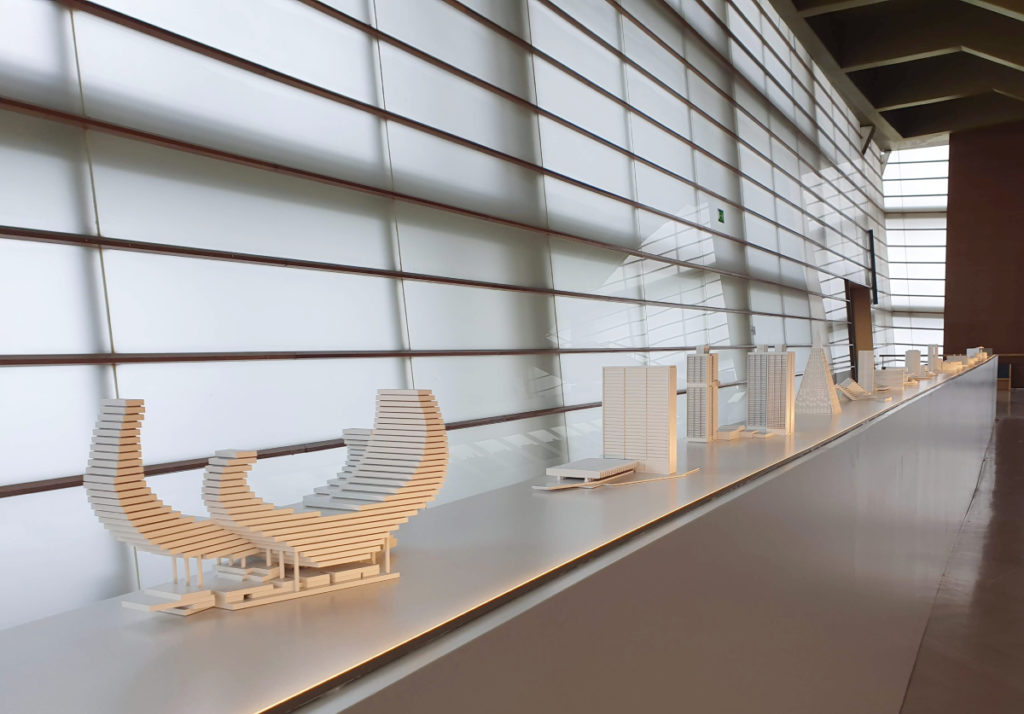 20 years after the construction of Rafael Moneo’s building, professors and students of the School of Architecture of the University of the Basque Country UPV/EHU show us the history of the site.

Between 1964 and 1989, three different calls for tenders were launched. Architect teams presented a total amount of 135 proposals.

The present Palace triggered an intense debate in San Sebastián between those who “defended a still image of the Belle Époque and those who supported its vocation of modern capital of culture”.

The San Sebastián Kursaal celebrates now 20 years since its opening. Rafael Moneo’s project, one of the most recognisable icons in the capital of Gipuzkoa, won a public tender that prompted a long and complex debate in the city. Professors and students of the Higher Technical School of Architecture of the University of the Basque Country (UPV/EHU) decided to re-examine the 25-year process (1964 to 1989) in which 135 architect teams competed in three different calls for bids.

The exhibition takes place in the framework of the Basque Country International Architecture Biennial MUGAK and opens today, 23st of October. It can be visited in the Auditorium Hall of the Kursaal, Friday to Sunday (except 25th November) from 11:00 to 14:00h., as well as during every event organised in the Auditorium untill the 8th of December.

The exhibition is not intended as a “historical account, a reconstruction with data and explanations of the events”, but as “a visual itinerary through those solutions offered by different architect teams for such a singular location as the K Site”, as its promoters explained. The research work was led by Mario Sangalli, a PhD in architecture, professor at the UPV/EHU and active member of the Peña Ganchegui Archives, which also participate in the show. The team is also composed by researchers Felipe Aurtenetxe, Ana Azpiri, Diego Rodríguez and Iñigo Viar as well as by students Paúl Campo, Ander Guerra, Adrián López and Laila Medina.

Obviously, the show includes the present building designed by Rafael Moneo, which opened now 20 years ago. There is also a selection of 20 models at a scale of 1:500, in chronological order. The models appear free from any context, oblivious to any particular place, situation or issue. Clean, white, abstract, they are presented as a sequence of formal solutions to the same problem. The building that originally occupied the site closes the series.

The itinerary is an opportunity to review projects designed by relevant figures of architecture. Besides Moneo’s proposal, awarded the Pritzker Prize in 1996, the third and last call for bids include works by Mario Botta, Norman Foster, Arata Isozaki, Juan Navarro Baldeweg and the team composed by Luis Peña Ganchegui, José Antonio and Mateo Corrales.

Other projects shown were presented to the first call for tender (1964 and 1965), which was called EuroKursaal back then. Among other things, the programme included a luxury hotel, dwellings, a cinema theatre, an indoor pool, a bathing house, offices, restaurants, a skating rink and shopping arcades. The winner was the team composed by Jan Lubicz-Nycz from the UK, Carlo Pelliccia y from Italy and William Zuk from the USA. Generally speaking, the proposals of the time correspond to “the expressionist power of those years”.

The second call for bids (1972 to 1975), called Gran Kursaal, also requested a luxury hotel, dwellings, garages, a convention hall, a swimming pool, a gym, offices and a restaurant. It was won by José Antonio Corrales and Ramón Vázquez Molezún, ahead of Francisco Javier Sáenz de Oiza. These proposals are “more urban” and try out different ways to occupy one block in the expansion district.

In the last tender called in 1989, “Moneo’s project offered the best interpretation of the space” – according according to the promoters of the exhibition – and “has the advantage of harmonizing its two conditions: singular icon facing the sea and urban facility in dialogue with the city it serves”.

On the 28th of November at 18:00h., architect Rafael Moneo and journalist Iñaki Gabilondo will meet in the Kursaal Chamber Hall to chat about the impact of the Kursaal as an economic driver and transforming element for the surroundings, as well as about the evolution of the building itself and how it has adapted to new needs and technologies.

Those interested in attending the meeting, need to request an invitation in the Kursaal webpage starting on the 24th of October. Tickets are free of charge and subject to capacity. Should the seating area in the Chamber Hall be complete, people with an invitation will be able to follow the meeting via streaming in an adjoining room.

Beatriz Artolazabal: “Increased training and knowledge of languages are the best assets for ensuring the employability of our young people”